I have been living in Australia for 16 years, and I still cannot get used to Christmas in summer.  I saw a notice in our local paper for kids to join Santa at a pool party. It’s not right. Snow capped fir trees and jolly, fat men in warm, red jackets have no place in 35 degree heat. Mentally I’m at the beach. The build up to Christmas does not register, and things turns to chaos as the realisation of impending festivities dawns on me around 20th December every year.

This year I’m determined to change the inevitable. I made those Christmas cards, and I had a plan for the porch. It was all going to happen, as if by Christmas magic, this week.

Last week I popped over to see my lovely friend, Mel, who owns MoppitandMore, a charming little shop the other side of Melbourne. It was partly to do my bit in the Shop Small campaign, and partly to spend the voucher I’d won in her Instagram ‘What does Colour mean to you?’ competition. OK, it was mainly the lure of a freebie, but what I chose with my voucher was the inspiration for a Christmas Porch Extravaganza! More of a festive spruce-up as it turned out, but it was an extravagant effort on my part.

Then, whilst I was humming with inspiration, and putting in place my cunning plan, Mr. B nearly spoiled everything. “Why is the tree not up yet?” he whined. “Nothing is Christmassy here. Surely it’s not too much to expect you to up the ladder and get the decorations out of the attic.” Whinge, gripe, moan, complain. Could I hold my nerve and keep the surprise a secret?

After a nerve wracking weekend of flippant excuses and feigned disinterest, I became a whirlwind of festive activity on Monday. At 8.30am, as Mr. B and his bike disappeared up the street, the drop sheets, step ladder and paint were hurled onto the porch in a frenzy of activity. In a bold (or rash) decision, I thought the weather boards could do with a fresh coat of paint. So the porch was transformed from grubby to dazzling white, Annie’s kennel changed from sludge brown to smart charcoal, branches of magnolia were bedecked with baubles (‘bebaubled’? If that’s not a word it should be) and the finishing touch was the chirpy new doormat.

Misses S and E returned from school amidst the chaos, and made tea and helped paint the kennel and clear up. All was calm and all was bright by the time Mr. B got home, and you know what . . . It is beginning to look a lot like Christmas. 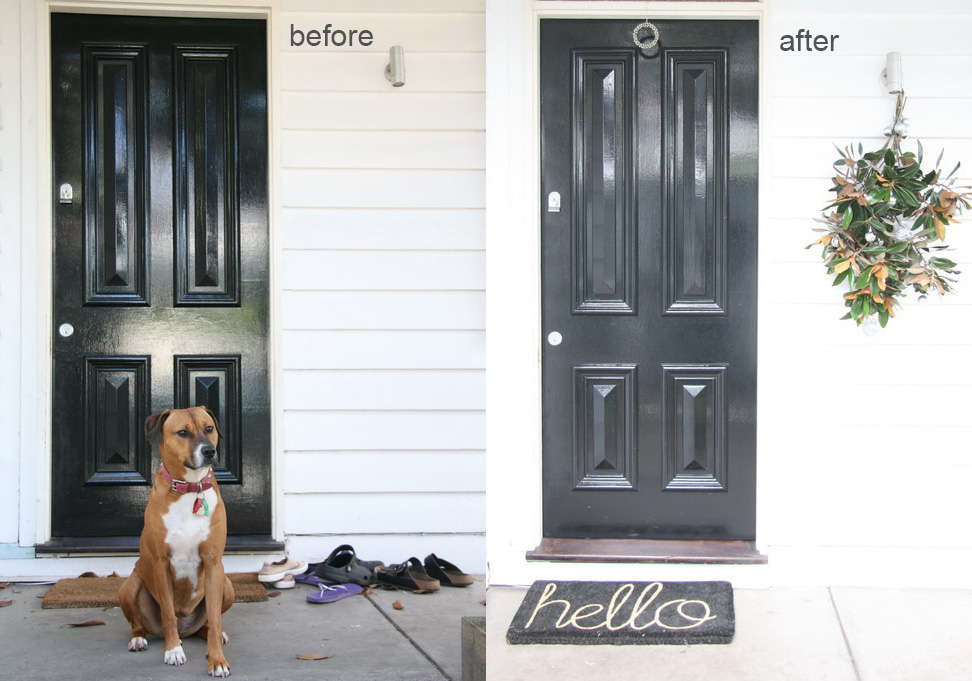