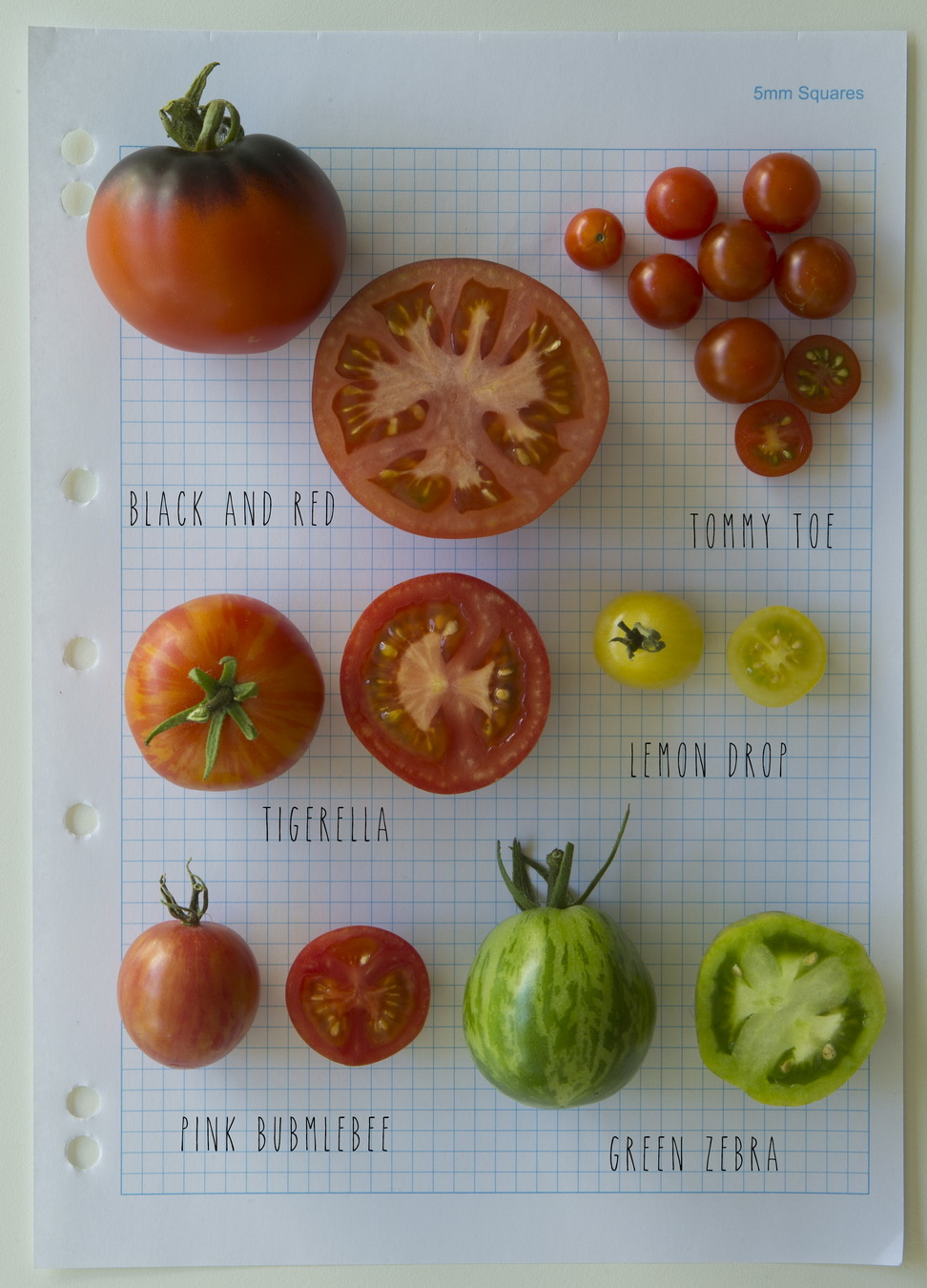 Well summer is officially over, and I haven’t reported much from the garden this year. To be honest, after my horrible end to last year I let it all go a bit to sh*t.

I had big plans at the start of spring, but as everyone knows, life rarely goes according to plan, and I’ll just have to accept that. I had successes and failures in the garden this summer – cucumbers and aubergines were pretty much a no-show, but tomatoes were friends I could rely on.

Filled with optimism in early spring, I decided I’d plant heirloom varieties from seed, which is a first for me. I chose five varieties from a wide choice at the Digger’s Club online store. I also had some free Tommy Toe cherry tomato seedlings from our annual local council event Spring into Gardening.

Having received just five seeds in a tiny, sealed vial, I concluded that Black and Red must be a rare or unusual variety. I planted two, and they proved to be strong and vigorous growers and good croppers. The fruits are around 7-8cm in diameter, with smooth skin which is bright red, darkening to black at the top when ripe. Exotic looking and fairly tasty, although nothing out of the ordinary – or at least mine weren’t. I have three seeds left and will be happy to grow them again next year.

Tigerella are my all-time favourite. Having grown them in the garden for four years now, they have never failed me. The first time I ever grew this variety I harvested 24 kilos of fruit from just a single plant! I admit I’ve never had anywhere near that kind of abundance since, and growing conditions must have been perfect that year, but I’ve always had a consistently good crop from this reliable friend. About the size of an apricot, they have an intense flavour and gorgeous stripey appearance, and seem to crop continuously the whole summer. These are my go-to tomato for salads, cooking, chutney, or just eating straight off the plant.

I admit I chose Pink Bumblebee mainly because the name was so cute – I’m a marketer’s dream. Cropping later in the season than Tommy Toe, it provided prolific amounts of pinkish tinged, sweet fruits about the size of kumquats. It was a lovely bonus to have cherry tomatoes right through to the beginning of Autumn, and I’ll definitely grow these again next year.

The Tommy Toe cherry tomato seedlings I started with from the Spring into Gardening festival were my back-up Plan B in case the Plan A seeds didn’t work. It was a great idea (if I say so myself) to start with some seedlings that were well on their way whilst waiting for the seeds to make their entrance, and meant a prolonged season of delicious home-grown tomatoes. These early little poppets were absolutely prolific and as sweet as strawberries – perfect for snacking on straight from the plant.

I anxiously awaited the Lemon Drop crop, as I planted too late last year and got nothing. They were late cropping, but zesty and fresh and made a colourful addition to those yummy tomato salads. It was great to have a foil to the sweet, red varieties and liven up the plate.

Last but not least, Green Zebra. I was a little anxious about these too, and so badly wanted to grow these beauties myself. These came to nothing last year too, and I have to admit, I struggled again this year. I planted two plants, one in a pot and one in the ground, and neither was particularly good. Fussy growers maybe. The both got leggy early on and eventually succumbed to early blight and then powdery mildew later on. I did get a few tomatoes from each, and they were really delicious with a zingy, intense flavour, and so striking with their green and yellow stripes. If you want an easy life then maybe this one’s not for you. I might have another go next summer, and I may not.

The garden’s looking forlorn and somewhat bedraggled at the moment, with the arrival of three enormous and ravenous Australorp pullets (baby hens, for those that don’t speak chook) to join our two tiny bantams. They arrived before I was really ready for them, but I jumped at the chance of getting these three beauties, and every bit of foliage in the garden has been devoured. So there’s nothing doing veggie-wise at our place until we’ve extended the chicken run and the garden is safe once more.